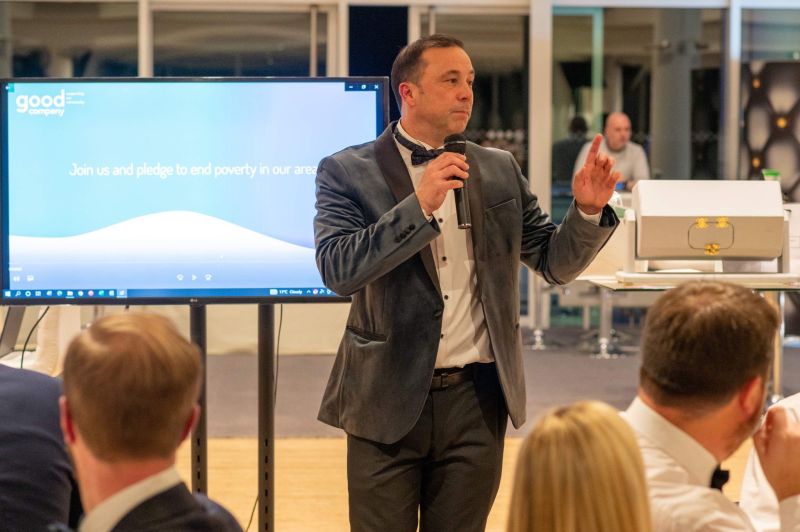 A Gala fundraising dinner was held recently to recognise 10 years of Epsom & Ewell Foodbank, with guests encouraged to sign up to the new ‘End Poverty Pledge’. Nearly 200 people attended the Gala dinner to mark a decade since the doors first opened in October 2012, offering emergency food parcels to those in need.

Now ten years on, the food bank has five centres in Surrey and is incorporated into Good Company (Surrey) charity, which includes Epsom & Ewell Refugee Network, support services as well as Epsom Pantry which opened this year.

Good Company’s mission is to create a community free from poverty and the newly launched End Poverty Pledge aims to build a movement of people and organisations committed to doing what they can locally to reduce poverty.

One of the food bank founders – Jonathan Lees, said Epsom & Ewell Foodbank was started after he was told of a similar initiative in Kingston and heard of a family struggling to feed themselves in Epsom. It opened with one centre in Epsom and one in Ewell, adding Leatherhead and Tadworth in 2013 and Banstead in 2014.

Jonathan Lees said: “I remember putting the first tins on our first bit of racking in one of our little rooms in the office with founding volunteer Jackie McKee. I think we counted 10 tins of baked beans. Now we have more than 10 crates of baked beans in the store. Never did we think that 10 years down the line we would still be here. We still have the mission to close the food bank and end poverty in our community, but that is not going to happen this year.

“So, while we are still here, we will challenge what is happening and support local people to rebuild their lives and have hope for the future. To recognise the impact of what we have done we held the fundraising event and this saw the launch of the End Poverty Pledge, as we believe everyone in our community can do something to improve the lives of those experiencing financial hardship.

“It is definitely not a celebration but a mark of appreciation of all that has happened, all we do and the invaluable support of so many people in or community who donate food, resources and funds, especially our group of amazing volunteers who are our lifeline and keep it all going.”

Since they opened, the Epsom & Ewell Foodbank have helped feed more than 50,000 people. As the foodbank grew, so came the realisation that emergency food aid was not a long-term answer to poverty so in 2019, the East Surrey Poverty Truth Commission was launched to raise awareness of the drivers of poverty and ensure that those affected by poverty are central to decisions about how to tackle it. Phase 2 of the ESPTC will start in 2023.

Jonathan Lees said: “As we look ahead after 10 years, our vision is now focused on tackling the root causes of poverty and the hope of a future without the need for food banks.”

For more information and to take the End Poverty Pledge please visit
https://goodcompany.org.uk/end-poverty-surrey/