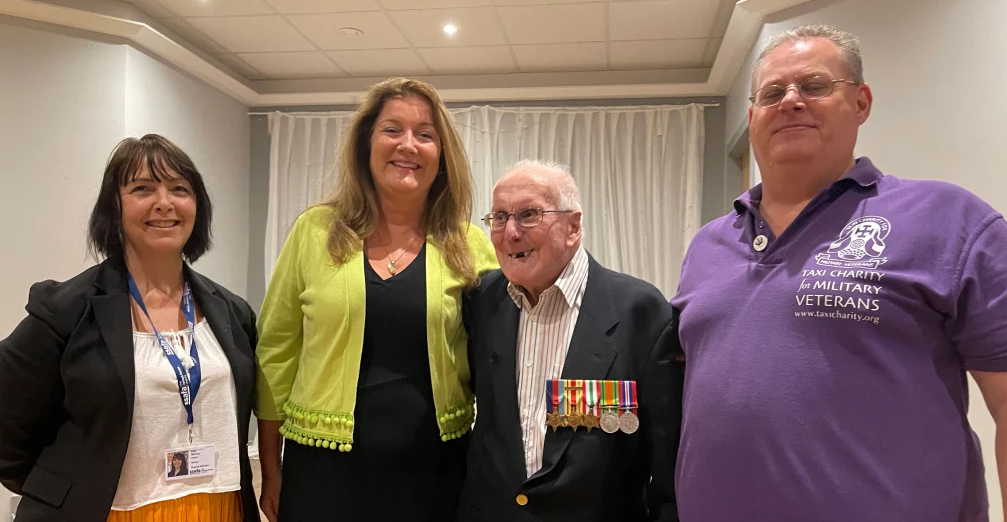 A 102-year-old Surrey war hero who was unable to wear his medals due to the condition of the ribbons can finally pin on his honours again, thanks to a local veterans’ project which arranged a repair mission.

George, who served in the British Army during the Second World War and now lives in Epsom, showed the old, frayed ribbons to a trained volunteer who was documenting his life story as part of the Force for Change veterans’ project.

On hearing George’s predicament, Tracey Morris, the project lead for Epsom and Ewell, contacted THE SOLDIERS, SAILORS, AIRMEN AND FAMILIES ASSOCIATION [SSAFA], the Armed Forces charity. Tracey, a communities and prevention coordinator in the county council’s adult social care team, worked with Adrian Mundin, SSAFA’s divisional secretary, to arrange for the honours to be sent to medal specialists in London.

SSAFA has strong links with the London Medal Company, which was pleased to support George’s request. The Taxi Charity for Military Veterans then stepped in to transport the medals to the company’s premises in Leicester Square, because of the age of the medals and to ensure their safe delivery and return.

The taxi collected the honours from an event marking the third anniversary of the Epsom and Ewell Veterans Community Hub, where George was showing his medals, still in the cardboard box in which they were delivered to him more than half a century ago. The honours were then conveyed from the hub to the medals company for repair.

Complete with new ribbons and displayed on a rack, the medals were reunited with their owner at the Comrades Club in Epsom, where George was also able to meet and thank Kim Morton, representing SSAFA, Ian Lingham, of the taxi charity, and Tracey.

The local veterans’ project brings together former service personnel through friendship groups, events and days out and may involve an opportunity to record their life stories for the archives.

It’s a pilot scheme which is initially focused on three areas of Surrey – Epsom and Ewell, Guildford and Surrey Heath. Places are available in all three locations. Former service personnel, whether younger or older, are encouraged to get involved.

The county council is working with armed forces charities and local museums and organisations to deliver the project, which is funded by the Armed Forces Covenant Fund Trust, under its Force for Change programme.

Sinead Mooney, Surrey County Council’s Cabinet Member for Adults and Health, said: “Thanks to everyone involved in this heartwarming project and particularly to George for telling his story and highlighting the benefits of the groups and networks for veterans in Surrey. I’d encourage anyone who has served, whether younger or older, to find out more about the opportunities in the county.”

Helyn Clack, chairman of Surrey County Council and the Surrey Civilian Military Partnership Board, said: “It’s particularly fitting during Armed Forces Week to be celebrating the repair and return of the medals that George so richly earned. I’d like to pay tribute to him and indeed all those across Surrey who have served, and are currently serving, for their courage and contribution.”

For more information about support for veterans across Surrey, visit Surrey Information Point. You can also download the free Forces Connect mobile app which signposts veterans, armed forces personnel and their loved ones to local support and advice. Search “Forces Connect” in Apple’s App Store or the Google Play Store.

The Epsom and Ewell Veterans Community Hub is holding an indoor street party on Sunday 26th June to celebrate the Queen’s Platinum Jubilee. Any veteran wishing to attend must register in advance (contact tracey.morris@surreycc.gov.uk or call 07790 585352).