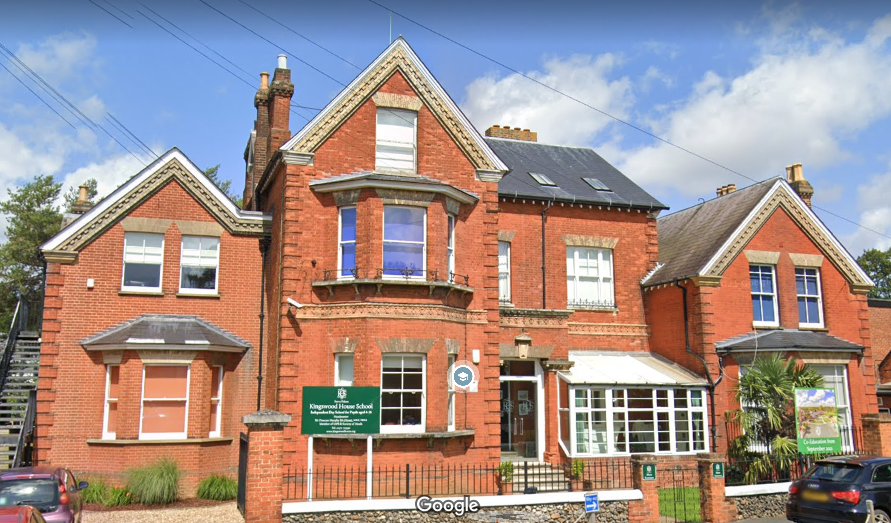 A new planning application has been submitted by land owners the Aczel brothers to Epsom and Ewell Borough Council to redevelop the Kingswood House School site. “Demolition of an existing building, relocation and reprovision of MUGA Sports pitch, and construction of new access and parking facilities for a SEND school”.

The plan is to replace the 100 years old school for many with Special Educational Needs and Disability (SEND) in West Hill, Epsom, with a new 60 place school for children with “extreme special needs “. Supporters of the existing school suspect the application is a ploy to develop all the land in the owners’ possession into a housing estate. The new application relates to the built area and a further application is expected for a housing estate on the current adjacent playing fields. If the owners were granted both permissions but failed to proceed with the new school development the suspicion of The Kingswood school support group is that an application will be pursued in the future for housing throughout the whole land.

Kingswood House School is asking local people to object to the new school application by 21st November 2022. The application can be seen on the Epsom and Ewell BC website under reference 22/01653/FUL.

Kingswood House School is a thriving and vital part of the community that provides a first class education to over 240 local children and which is the only school in Epsom to be listed as an Asset of Community Value.

According to a report commissioned by the land owners “There are (SEND) places available across all year groups in the…. independent ….and…. public sector within Surrey…. and Epsom and Ewell and …..should any pupil from Kingswood House School require a place within (either sector) … there will be a place available”. Alfredson York Associates Ltd. The author of this report Jonathan Powell goes on to conclude in his report: “Given that Kingswood House School is not a special school and has no particular specialism that is not provided within the same catchment from which Kingswood House currently draws, the proposed development would not significantly alter the choice and availability of places.”

Dr Kugathasan Senduran disagrees and commented: “Education provides us with the fundamental tools we require to live. Switching schools is more likely to demonstrate a wide array of negative behavioural and educational outcomes. If education collapses, everything does. You do not need an atomic bomb or a long-range missile only the collapse of education in a country to ruin it forever. I simply cannot believe the council is even considering their proposal of demolition of an existing building and interrupting children’s education. I strenuously object their proposal.” He is one of 30 objectors to date who have gone public on the Council portal.

Although Kingswood House is a private school, it is a charity and any profit is reinvested into the school. By contrast, the proposed school, which is not backed by the Local Education Authority, would be run by a private operator (with profits going to shareholders) and “would not be aimed at local children”, Kingswood School supporters say.

Richard Laudy, a Governor or Kingswood School, adds “There will be problems with access via West Hill Avenue, currently a tranquil street. At least two protected trees would need to be removed. The plans do not include enough space for drop-off, causing queues, overspill parking, and nuisance on local roads. The proposed new school only has 22 parking spaces. This will be insufficient for the specialist nature of the school.”

Richard Evans, Chair of Governors at Kingswood House School, confirmed that the School had not been consulted over the plans and that: ”…the School vehemently opposes the unacceptable plans and is working with local residents to defeat them. Kingswood House has been serving the local community for over 100 years and provides the unique offering of special needs and mainstream children developing alongside each other. Our school is a listed Asset of Community Value, which would be lost along with our playing fields if the landowners’ plans went ahead. The proposal would also damage the tranquil character of Stamford Green Conservation Area, creating a chaotic new access on West Hill Avenue. We need local people to make their voices heard and object to this speculative and harmful proposal.”

Cllr. Steve Bridger, Councillor for Stamford Ward, is aware of the application and has ‘called it in’ so it will be heard in front of the Planning Committee rather than decided by Council officers.

Public comments can be submitted via the Epsom & Ewell Borough Council planning applications website using the reference 22/01653/FUL, then clicking on ‘Make a Comment’.

Grayling stood up by developers….