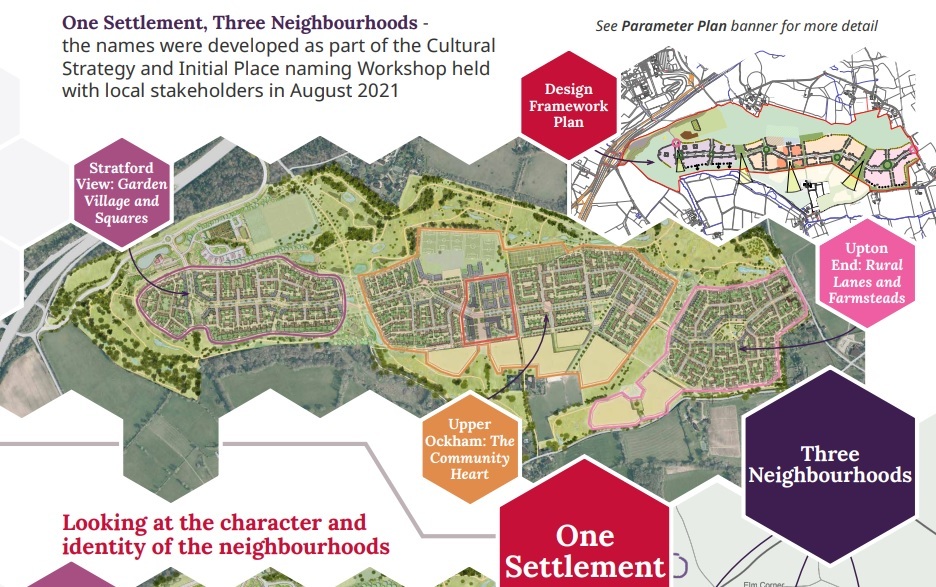 Wisley Airfield town plan: We report on a Surrey housing application that illuminates issues all local boroughs face today [Ed.] : To paraphrase from a popular TV show: “Wrong location, wrong location, wrong location.” That’s the message from campaigners against plans for 1,700 homes on the former Wisley Airfield. They say traffic concerns, an abundance of wildlife and trying to fit an urban development in a rural area are all reasons for the plans not to go ahead.

The former airfield is located alongside the A3 and is just over a mile from junction 10 with the M25, where another set of controversial works started this month. It was allocated as a new settlement in Guildford Borough Council’s local plan for around 2,000 homes, shops and offices. An outline planning application was submitted to the borough council by Taylor Wimpey for the first 1,700 in the summer, and residents have until Monday (October 3) to comment on the plans.

There are so far 168 objections to the outline plans on the borough council’s planning portal and comments received after the deadline will ordinarily also be considered. On a walk around the current site, which was used as an airfield from 1942 until 1972 and still has a tarmac landing strip in the middle, campaigner Chris Campbell, from Villages against Wisley New Town, told the LDRS he did not believe a new town should be built there. “Wrong location, wrong location, wrong location,” he said. “Location is everything and as you can see, this is not the location for a town.”

Around the old runway, the site is used as farmland, with two tractors out on the fields on the day of our visit.
We also see several kites in the air, and pass “Snakes Field”, so-called, the campaigners tell me, because there are grass snakes, slow worms and amphibians living there. They’ve also seen badgers and owls on and around the site, and Mr Campbell raises concerns particularly about the impact of an increase in the number of dogs walking through woodland, a special protection area, between the site and the A3.

He said the “last thing” that’s needed for the ground nesting birds on the site, including the Dartford warbler, night jar and woodlark, would be the additional 400 dogs that could come with the new homes.

A suitable alternative natural green space (SANG) will be allocated on the site to “avoid adverse effects on the integrity” of the special protection area according to the borough council’s local plan. Taylor Wimpey documents state that the SANG provision is a “bespoke provision agreed with Natural England” and that more than half of the site will be accessible open space, as well as a 20 per cent biodiversity net gain on the site.

Frances Porter, chair of Ockham and Hatchford Residents’ Association, walks across the former airfield every day with her dogs. She claimed she was told at a meeting with Taylor Wimpey representatives that traffic calming measures around the new town were designed to “frustrate” motorists out of their cars. But she doesn’t think that people living in the town will be pushed out of their cars. “People haven’t got anywhere else to go,” she said. “You’re going to need a car; you can’t get the bus.”

The borough council’s local plan identifies requirements for the site including a “significant bus network” going to Effingham Junction and/or Horsley stations, as well as  Guildford and Cobham. It would also require a cycle network to key destinations including stations, Ripley and Byfleet “to a level that would be attractive and safe for the average cyclist”.

Imogen Jamieson, vice chair of Ockham Parish Council, does not think the narrow roads surrounding the site can support the additional traffic, and isn’t convinced cycle lanes would be used anyway. She said: “You’re not going to pack your three children onto the back of bikes and cycle them to Horsley to get to school in the pouring rain.” The parish councillor also said she believes it’s a “myth” that so many new homes are needed, though she does acknowledge that there is a need for places for people to live. She said the environmental impacts of building new homes are far greater than re-purposing and retrofitting existing buildings, which can be done in towns and urban areas.

On top of the plans for the airfield, a further 1,500 new homes are planned in a three-mile radius of the site, but Mrs Jamieson said homes would be better built in areas where there are already transport links, employment opportunities and facilities such as doctors and schools. She said: “Here you’re entirely reliant on a car. It’s positioned right by the strategic road network. So it’s going to mean that people are constantly in their cars trying to access everything.” She claimed there was an over-allocation of homes in the local plan, which came to light when the census released in June showed the figures used to draw up the plan were too high. “I’m still trying to understand the way housing is delivered in the country,” she said. “I think it’s a bit of a myth that we need homes in the way that we’re constantly told we do.”

A Taylor Wimpey spokesperson said: “The former Wisley Airfield is allocated for development in the Guildford Borough Council local plan and our proposals have been carefully considered following close engagement with key stakeholders and the local community. We understand the concerns of local residents regarding traffic and our proposals include a number of measures to encourage the use of sustainable transport options, including new bus services and cycle routes. The design and layout of the development has been considered with the surrounding area in mind and we will continue to consult with residents on this as our plans progress.”