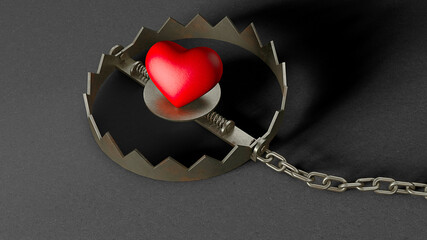 Two people have been sentenced to a combined total of 11 years and nine months’ imprisonment at Guildford Crown Court today (23 December) for orchestrating a complex romance fraud scheme which conned five people out of over £200,000.

Using a variety of fake personas they would target victims through online dating sites, gaining their trust over a period of time by making them believe they were in a relationship, before asking for large sums of money under false pretences which they never intended to pay back.

Key to the scams were a series of elaborate and emotive excuses for needing money from the victims, ranging from the persona being held by Dutch customs when trying to return to the UK, all the way to being kidnapped, with money needed to ‘secure their release’.

In order to make their lies more believable, they would forge documents including death certificates and airline tickets. The victims were always falsely reassured that the money would be paid back, often with the promise that the persona was due to inherit hundreds of thousands of pounds and just needed a stop-gap loan until they had the funds.

In one case, a victim was defrauded over a period of 14 years before they were told by officers that the person they thought were speaking to wasn’t real and was in fact a scammer.

The investigation began after a Surrey victim came forward in 2020 and officers were able to trace bank transfers made by the victim straight to the pair’s door. Numerous devices were seized from their home address, leading to the discovery of a gold mine of evidence which showed the pair plotting, sharing account logins and fabricating stories together to manipulate victims with.

Working with City of London Police’s National Fraud Intelligence Bureau, a further 179 victims of fraud were identified throughout the course of the investigation, with 80 linked to romance fraud, 22 to investment fraud and 77 who had had their identities or bank details stolen or shared. They are being supported by the City of London Police’s victim care unit. Officers also uncovered evidence of money laundering by painstakingly tracing bank transfers between multiple accounts, which fraudsters often do to make money as hard as possible to trace. In total, over £400,000 was found to have been laundered through their bank accounts.

Fredrick Diji, 37, of Flaxman Road in Lambeth, was sentenced to eight years’ imprisonment after pleading guilty to conspiracy to defraud, concealing criminal property and possession of an identity document for improper means.

Racquel Johnson, 43, also of Flaxman Road in Lambeth, was sentenced to three years and nine months’ imprisonment after pleading guilty to one count of money laundering.

On sentencing, Judge Fraser commented that both Diji and Johnson carried out a ‘truly callous conspiracy of significant scale’, adding ‘the harm you have caused has been devastating to so many’. Judge Fraser also praised Detective Constable Becky Mason’s ‘tireless’ work in investigating the case, labelling her diligence as ‘quite remarkable and most impressive’.

Detective Constable Becky Mason, who investigated the case, said: “Romance fraud is heartless and cowardly and has a devastating impact on victims, not only financially but emotionally as they find their trust has been exploited in the cruellest of ways.

“Diji had his routine down to a tee, and assisted by Johnson, they would work together using a number of fake personas to target victims online, love-bomb them with promises of meeting in person and declarations of love, before fabricating reasons for desperately needing money, telling the victims that if they really loved them they would help them out. It was the ultimate manipulation which preyed on people’s emotions and good nature.
I am incredibly grateful to each of the victims for supporting our investigation and I hope that today’s result gives them some sense of justice.”

“At Match, the safety of our members is our highest priority. We are very sorry to hear about this case. We have a dedicated team monitoring security 24/7, deploying industry-leading technology and human checks to ensure user safety. We are constantly reviewing our safety methods and proactively communicate safe dating advice to our members and within our platform.

“We encourage everyone to take the same precautions when meeting people online, as they would if they were meeting through friends or in a pub, bar or public space. It is always best to keep conversations on the Match site, messaging service or app, so that there is an accurate record and any concerns can be quickly reported. We also have a ‘report this profile’ function prominently positioned.

“We strive to create a safe and friendly environment for all users. Match has a zero-tolerance policy for reports of serious offences and encourage anyone who has felt exposed to unsafe behaviour whether through our services or anywhere else, to speak to the police, so that the matter can be investigated and documented. We have co-operated with the police on this case, as part of our commitment to work with the wider industry to define standards and share information.”

To read more about the signs of romance fraud click here.

If you, or someone you know is vulnerable to Romance Fraud please report it online or call 101.

If you think you have been the victim of romance fraud, contact your bank immediately and report it to Action Fraud on 0300 123 2040 or via www.actionfraud.police.uk