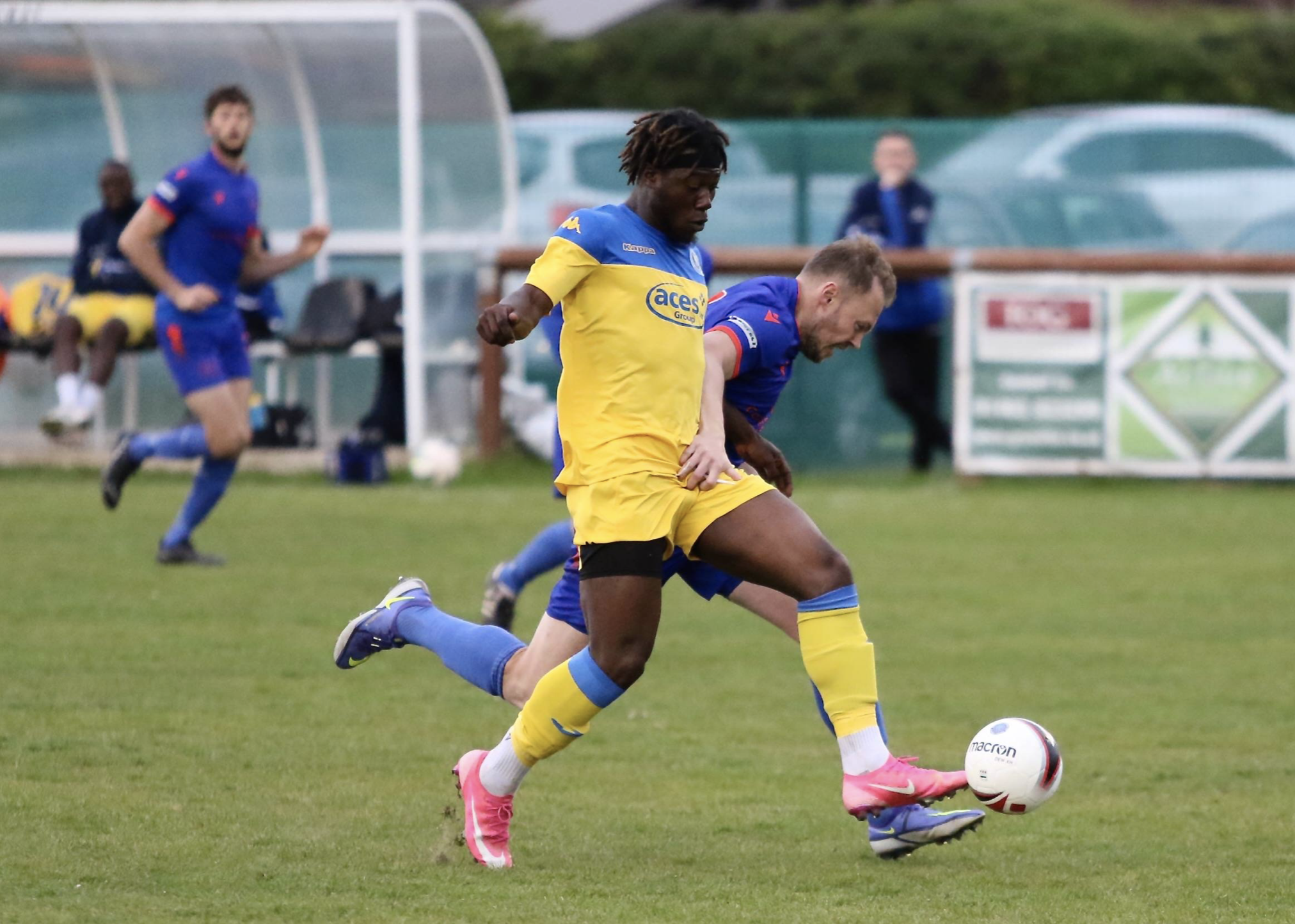 Salts fall in the final seconds

After two very even contests already this season, it was no surprise that this third meeting at the neutral venue of Alfold FC produced another close encounter. Unfortunately for our boys, a 96th-minute goal from James Liddiard came too late to reply to and we had to accept defeat by two goals to one.

With a very important playoff match coming up against the same opposition on Saturday, I wondered how the teams would line up, but both went as strong as they could. Brad Peters was good to go at the back after limping off on Saturday at Mile Oak, while Mike Hill was back in the starting line up as was Mo Cisse. Kofi Quartey and Josh Uzun found themselves on the bench alongside the fit-again Gideon Acheampong.

And we got off to a flyer. Athan Smith-Joseph broke through the middle and had time to steady himself before slotting the ball low to the right of Midhurst keeper Josh Bird to open the scoring in the fourth minute.

The opposition sent a dangerous free-kick through our six-yard area and out the other side, but this was to be a game of few actual chances. Midhurst nearly got back on level terms after a low ball in from the left was well blocked and then kicked away by Sheikh Ceesay just before the half-hour mark before Hill and Liam Dreckmann picked up a yellow card each for an episode of handbags. This was typical of much of the first half as a niggly match was played out, aided and abetted by a referee who wanted to stop play every few minutes, although he also missed Hill getting clattered on the side of the head. Then when Hill was kicked up in the air by Harry Giles he received a lecture, but no card.

It was apparent though that our opponents were beginning to gain the upper hand in the match and they deservedly drew level in the 39th minute with an acrobatic overhead kick from Marcus Bedford from close range that gave Ceesay no chance.

At the half, Hill was replaced by Acheampong with Louis Chin moving into midfield and despite the loss of our gifted playmaker, our team began to tick a little better as a result. Ricardo Fernandes made a good run on the left only for his cross to be palmed away by Bird just ahead of Tyreke Leslie before Luke Miller tried his luck in the 69th minute with a powerful strike from a very narrow-angle, but he was also off target.

We had a flashpoint in the 71st minute when Bird was out quickly to clear a through ball just ahead of Fernandes and on his way back to goal he patted our man on the head, which Fernandes clearly didn’t like and his reaction earned him a yellow card after the obligatory ten-man scuffle had settled down. Meanwhile, Bird wasn’t even spoken to!

In the 76th minute Mario Qurassaca made his debut, coming on for Leslie as we began to threaten a little more. Cisse struck well from 25 yards and was inches wide of the post with Bird unsure and scrambling, although at the other end we were then caught our by a deep ball from the right, only for substitute Will Essai to blaze over from a decent position about twelve yards out.

Then in the 89th minute we had a golden opportunity as a Peters pass rebounded kindly for Qurassaca who was through on goal as a result, but after riding a challenge he then dragged his shot just beyond Bird’s right hand post from twelve yards with the other side of the goal looking like the better option.

Uzun came on for Cisse as we approached injury time, presumably ahead of what was looking like a sure-fire penalty shootout, but Midhurst had one more card to play and a low near post strike was kept out by Ceesay, but only for a corner. From the delivery James Liddiard rose highest to meet the ball, glancing it in from close range in the sixth minute of injury time. Ceesay was appealing for a foul and it did appear that he may well have been held back, but the offence wasn’t spotted and seconds after the restart the match was over.

Having spoken to a number of people after the match, no one could work out exactly why we played as much as six minutes extra time, but this was almost forgotten as upon the final whistle there was a big scuffle between the players which seemed to go on for quite a while and when the smoke cleared and everyone had calmed down Jerry Antwi had received a red card. I don’t believe this will keep him out of Saturday’s rematch in Midhurst, but it would definitely rule him out of any playoff Final should we get there.

Did we deserve to lose this cup final? No, we didn’t, but equally, it could be argued that we didn’t do enough to win it either, although we did improve in the second half. It was a tight match that just didn’t go our way. Maybe on Saturday, the positions will be reversed, but one thing appears certain. It should be another close match!