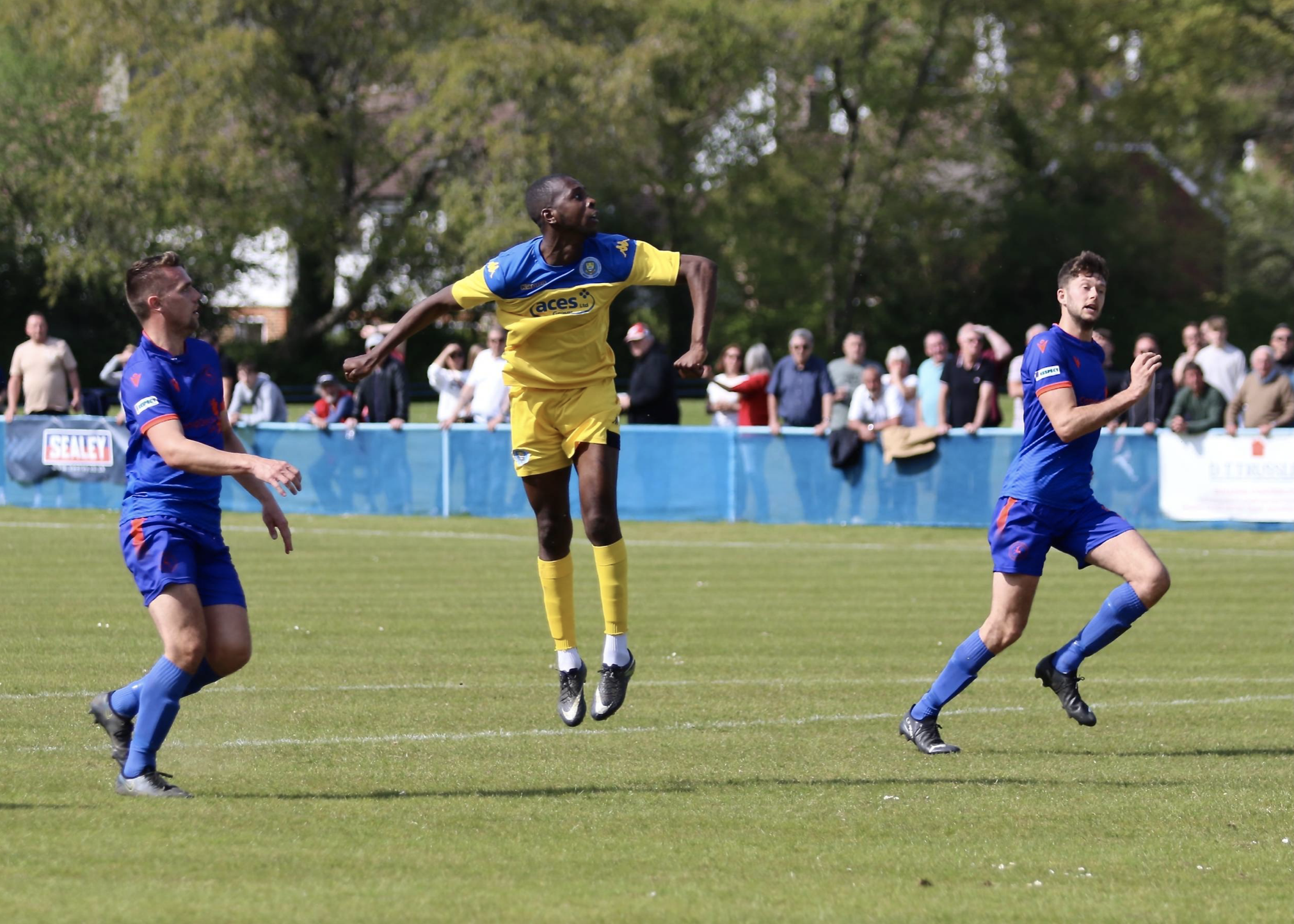 A poor start leads to a premature season’s end

After three very tight meetings between ourselves and Midhurst & Easebourne this season, this Playoff Semi-Final always threatened to follow a similar path and over the ninety minutes we witnessed another even contest. Unfortunately, a poor opening twenty minutes left us 2-0 down and we were never able to recover, eventually losing by the same score as we had just four days previously in the Division One Cup Final. Both teams appeared to be at full strength for this match, although for us that meant once again that Player/Manager Jamie Byatt was unable to take the field. At the back, Gideon Acheampong was able to start and upfront Mario Qurassaca made his first start. As a result, Jerry Antwi and Mo Cisse started on the bench, although both would enter the playing arena later.

For those who noted my gladiatorial reference to an arena here, it is largely because of the way these two teams squared up following the conclusion of the aforementioned Cup Final, and if I’m honest I expected more fireworks here. However, Referee Paul Saunders was totally on top of this match and ensured that hardly any extra-curricular activity took place this time. We had an early free-kick from which Ricardo Fernandes gave Josh Bird some early catching practice, but were behind in the sixth minute when Lewis Hamilton drove through our static defence and slotted the ball past Sheikh Ceesay from close range.

This was an awful start and it got worse in the 22nd minute when a deep ball in was met by a looping header towards goal, but somehow Liam Dreckmann was able to reach it first to force the ball in from close range. We didn’t know it for certain at the time, but the damage was already done, although we fought back well from this point and made it a much more even contest for the remainder of the afternoon. A corner was flicked onto the far post where Tyreke Leslie struck at goal from a narrow angle, but Bird was equal to the shot and turned it around the post. Next to try was Mike Hill with a long-range strike that Bird clawed away from under pressure from Qurassaca, although our striker was flagged offside, so it wouldn’t have counted as he was definitely in Bird’s line of sight. Then in the 39th minute, we pulled a goal back and it was a bit of a strange one really as a ball over the top fell kindly for Qurassaca who then failed to control it, but as a result of this, Bird came out of goal only to then realise that he wasn’t going to get there in time and Qurassaca then nodded the ball over him and it bounced over the line and up into the roof of the net from eighteen yards. He had a half-chance to score another as a deep cross was headed over at full stretch, but as the halftime whistle went, it looked like we had finally got going and there was still plenty of time to go to salvage this.

An early Hill header in the opening minute was covered easily by Bird but the majority of this half would be spent in midfield as the home side kept us largely subdued. In the Cup match they had negated our threat on the wings by putting two men on them; a trick Roffey had also used against us back in March, but in this second half both Luke Miller and Athan Smith-Joseph seemed to play deeper, which meant that our service to Qurassaca was extremely limited and he too then dropped further back leaving us with no one upfront. Midhurst then cut us apart on the hour with a deep ball over on the left that was volleyed across goal but fortunately with no one there to meet it.

Unfortunately, we were then forced into a couple of substitutions as Hill departed, but also Brad Peters who appeared to suffer a recurrence of the injury he picked up at Mile Oak seven days previously. They were replaced by Cisse and Antwi respectively. Miller’s shot was then blocked by a defender before Bird clawed away another deep delivery. We had a little incident when Dreckmann squared up to Ceesay who pushed back and I thought that the award of a yellow card for both was a little harsh on our keeper. Ceesay then made an important save after our defender missed a ball in from the left, but our man was out quickly to smother the ball which squirted out for a corner, which was then headed over by Marcus Bedford. Josh Uzun entered the fray with five minutes left as we made an attacking substitution, but five minutes from time Acheampong then dragged Bedford back as he threatened to get through and picked up a yellow card that could have been red, had he committed the offence a little closer to goal instead of back on the halfway line.

As time ran out we had a bit of good pressure and Fernandes’ low shot from outside the penalty area was powerful enough, but wide, and Smith-Joseph had the last meaningful attempt on goal in the fourth of seven minutes of injury time, but Bird was able to make the easy save.

And this summed up the match and to a certain extent the season. We were never really able to hurt our opponents enough in this match and you just felt that a fully fit Byatt would have been the difference in many of these matches this season. As I look back at the stats I can see that he scored thirty-one goals in twenty-eight appearances, of which we lost just six, but the unseen statistic here is that he was unable to take the field in thirteen matches and we lost six of those too. Without him, we just weren’t the same and at the age of forty, it will be interesting to see whether he retains the tag of Player/Manager next season or whether we have seen the last of him as a player.

So Midhurst & Easebourne progress to a playoff final at home to Shoreham, who defeated Seaford Town 2-0 on their own pitch, while we now face another season in Sussex at Step Six, our fifth season at that level. There are worse places to play football without a doubt, but it feels somewhat underwhelming that a team this good has fallen away so badly this season, finishing with four straight losses. For sure it has been a horrible end to the season if you are an Epsom fan and no, there is no time left to bounce back.