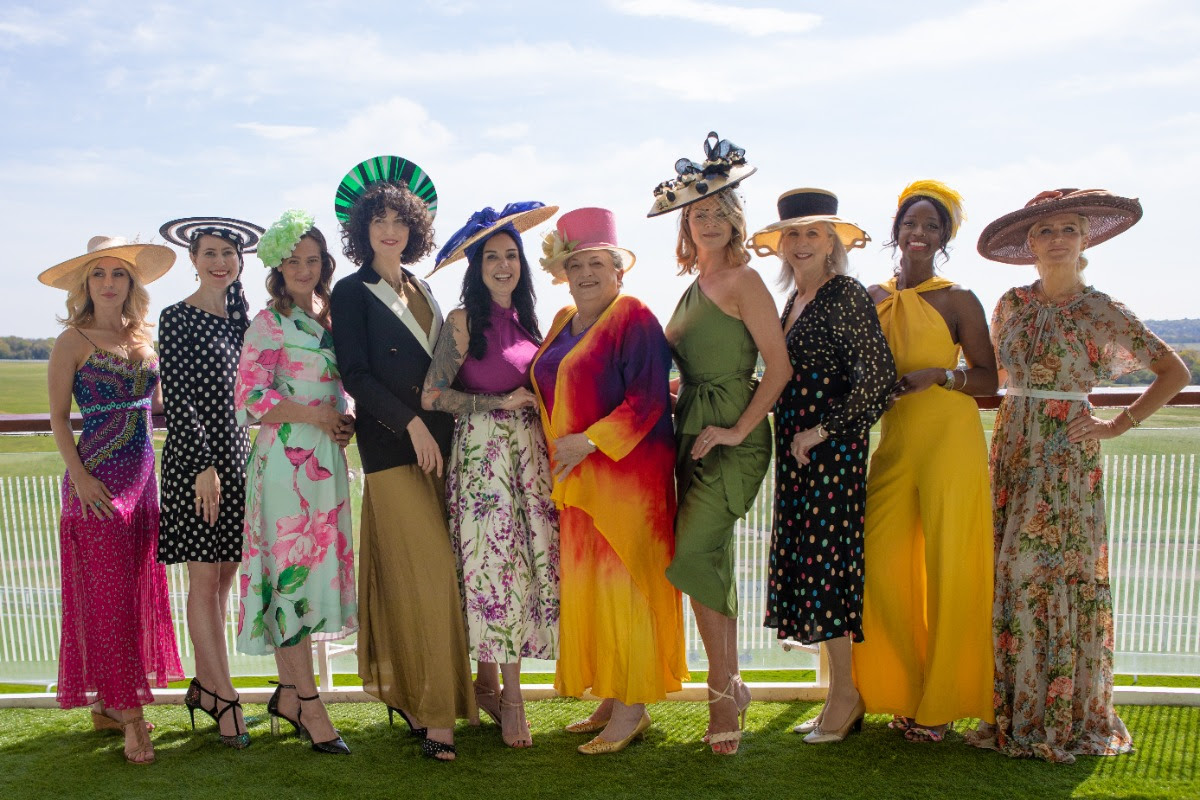 Image: Local Models showcasing a selection of the hats in question. The models included Lisa Connell and Anne McEntee(fifth and sixth from left) who represented Brain Tumour Research.

Some of the UK’s leading milliners have created a one-off collection of hats inspired by the seven decades of The Queen’s reign to be auctioned in aid of Brain Tumour Research, it has been announced today.

The collection of 15, which is entitled “Hats Fit For A Queen” and includes pieces by Royal milliners Stephen Jones OBE and Rachel Trevor-Morgan, is being auctioned online until midnight on Sunday 12th June.

The hats will be displayed in the Queen’s Stand at Epsom Downs Racecourse for both days of The Cazoo Derby on Friday 3rd & Saturday 4th June.

This year’s Derby takes place across the central weekend of Platinum Jubilee Celebrations when Her Majesty The Queen is set to attend Derby Day for the 73rd time, her first since 2019.

The project forms part of Go Epsom’s wider Jubilee festivities across the Borough of Epsom and Ewell, which celebrate the Queen’s lasting association with hats and their continued importance as a quintessential piece of race day style.

More information about the initiative can be found here which is a new collaboration between Go Epsom, The British Hat Guild, Brain Tumour Research and Epsom Downs Racecourse and will be promoted via the hashtag #HatsFitForAQueen.

Karen Pengelly, Bid Manager for Go Epsom said: “We chose hats as a theme because it ticks every box: hats and style are synonymous with horseracing, Her Majesty is the world’s most famous hat wearer and Epsom is home to the University of Creative Arts and some of the brightest young designers. Hats are fun, stylish, visual and colourful, perfectly matching the excitement and ambience of Epsom over the first weekend in June. In addition to this great initiative, our local schools and charities are busy designing and embellishing their own headpieces and we look forward to seeing all of the hats being proudly shown off over the Jubilee weekend!”

Carol Robertson, National Events Manager of Brain Tumour Research comments: “We are proud and delighted to be involved in this project, and it was wonderful to see Lisa Connell model one of the hats at Epsom a few weeks ago. The British Hat Guild’s generous contribution of these regal hats for the Derby will raise crucial awareness and fund vital research that can improve the lives of those living with brain tumours across the country”.

Speaking on behalf of The British Hat Guild, Edwina Ibbotson said: “It has been a pleasure to have been involved in this wonderful project which has created 15 ‘Hats Fit for a Queen. Each hat has been expertly crafted in celebration of one of the seven decades Her Majesty has been on the throne and it is inspiring to know that the funds raised will support this vital charity. We hope to raise as much money as possible for such a worthy cause”.

Simon Durrant, General Manager at Epsom Downs Racecourse said: “This year’s Cazoo Derby at Epsom Downs is set to be a spectacular celebration across the Platinum Jubilee weekend, and we cannot wait to welcome Her Majesty and tens of thousands of racegoers back after the last two years. We’re delighted to be working closely with Go Epsom, The British Hat Guild and Brain Tumour Research in what we hope will be a lasting collaboration. We want to play our part by utilising the profile of this year’s event to celebrate the very best in raceday style across The Queen’s reign and raise important funds, and I would urge everyone to donate to the auction if they are able to.”