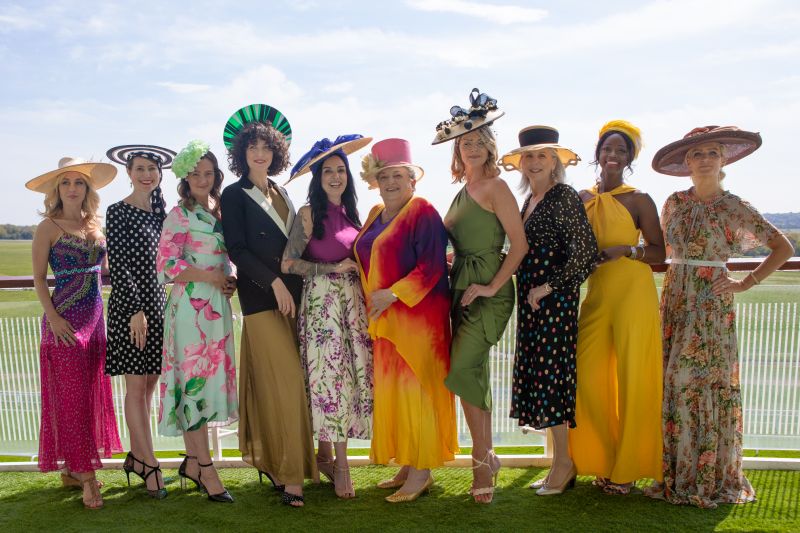 An online auction of a collection of 15 hats created for the Platinum Jubilee by some of the UK’s leading milliners has raised close to £9,000 for Brain Tumour Research. The collection of hats was inspired by the seven decades of The Queen’s reign and entitled “Hats Fit For A Queen”.

Pieces by Royal milliner Rachel Trevor-Morgan and milliner to the stars Stephen Jones OBE formed part of the collection, which was displayed in the Queen Elizabeth II Stand at Epsom Downs Racecourse on both days of The Cazoo Derby (June 3 rd & 4 th ), before subsequently being auctioned online.

The Cazoo Derby formed part of the official celebrations for The Queen’s Platinum Jubilee.

The project formed part of Go Epsom’s wider Platinum Jubilee festivities across the Borough of Epsom and Ewell, which celebrate The Queen’s lasting association with hats and their continued importance as a quintessential piece of raceday style.

The initiative was a new collaboration between Go Epsom, The British Hat Guild, Brain Tumour Research and Epsom Downs Racecourse and was promoted via the hashtag HatsFitForAQueen.

The project formed part of Go Epsom’s wider Platinum Jubilee festivities across the Borough of Epsom and Ewell, which celebrate The Queen’s lasting association with hats and their continued importance as a quintessential piece of raceday style.

The initiative was a new collaboration between Go Epsom, The British Hat Guild, Brain Tumour Research and Epsom Downs Racecourse.

Karen Pengelly, Bid Manager for Go Epsom said: “I am delighted that we have been able to help raise so much money for Brain Tumour Reaseach with ‘Project Hat’. It was very satisfying to see some of these incredible hats being worn over The Derby weekend by some extremely well known celebrities. And to know that they have now gone on to be cherished by their new owners is wonderful. If Her Majesty the Queen had been able to attend the Derby I feel sure she would have been very touched to have seen the efforts that the UK’s top milliners had gone to as a nod to her.”
Hugh Adams, Head of Stakeholder Relations at Brain Tumour Research, said: “We are extremely grateful to Go Epsom, Epsom Downs Racecourse and The British Hat Guild for staging this wonderful exhibition, creating such a valuable platform to raise awareness of brain tumours and for the money raised. The auction proceeds will fund the equivalent of three days’ research at a Brain Tumour Research Centre of Excellence where scientists are focused on improving treatments and, ultimately, finding a cure. To be a part of this wonderful initiative during the Queen’s Platinum Jubilee celebrations have made this very special for us.”
Edwina Ibbotson, on behalf of The British Hat Guild, said: “All the 15 members of the British Hat Guild who took part were honoured to participate in the Platinum Jubilee celebrations. We loved the idea of making hats from all decades of  HRH The Queen’s reign from styles which would have been worn at The Derby in the 1950’s and right through to the modern day.  The Guild have a close relationship with Brain Tumour Research, and we were thrilled that our members creations could be auctioned off to raise vital funds for them and their important work.”
Simon Durrant, General Manager at Epsom Downs Racecourse, said: “The Hats Fit For A Queen display at The Cazoo Derby proved to be a great success and the whole Jockey Club team are delighted to see the collection raise close to £9,000 for Brain Tumour Research. It was a great honour for The Cazoo Derby to be part of the official celebrations for the Platinum Jubilee and we hope the money raised for Brain Tumour Research will ensure that there is a positive and impactful legacy for this initiative.”