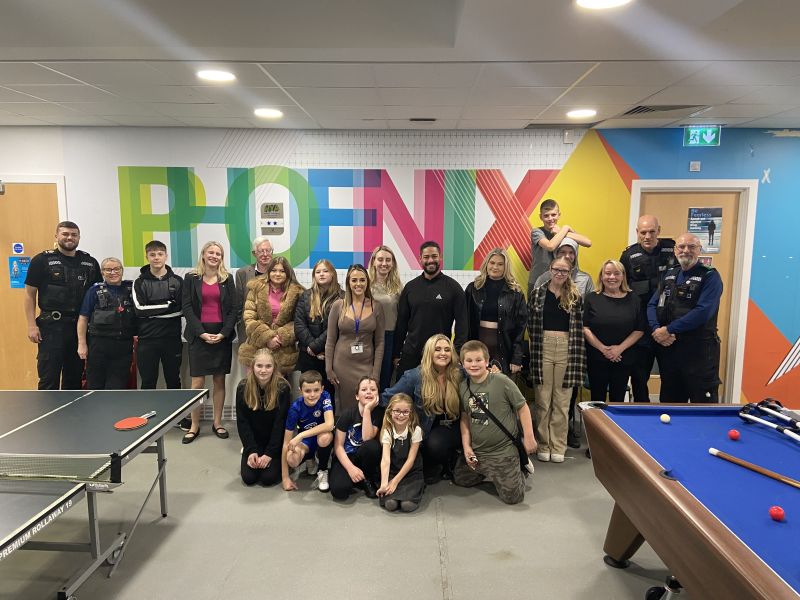 A youth club in one of Surrey’s most deprived neighbourhoods is teaching children business skills, getting them birthday cakes and has seen kids queuing out the door to get in. The Friday night club, which can see up to 70 children in a week, also serves food to the kids, has them running their own tuck shop and deciding what to do with the profits, and aims to teach them things they may not learn at school.

The MYTI club runs each week and during school holidays at the Phoenix Youth Centre in Tadworth, and was set up by Tony Britto when he pitched to Surrey County Council after a call out for people to use the space. The LDRS (Epsom and Ewell Times’ news partnership with the BBC) visited the youth club, where police officers were playing table tennis with the children, burgers were served for dinner, and everyone joined in with a rendition of happy birthday for two of the kids.

The deputy police and crime commissioner for Surrey and two county councillors were also there, showing just how much support this project has, as it takes steps towards gaining charitable status to take some of the strain off Tony’s pockets. He’s put a lot of his own money into the club, which costs around £70,000 a year to run, but that’s no longer sustainable and getting charitable status would mean access to more funding streams. ‘Parents can’t believe how confident the kids have become’

Tony’s own past is what has pushed him to want to pass on skills to these young people. After his dad died and Tony was taken into the care system in London, he said he started drinking from a young age and was “up to no good, getting into trouble, fighting”. You had an inkling of something that you shouldn’t be doing, I was probably up to it,” he said. But he stopped drinking nearly six years ago, and alongside working for his own roofing company, is running the club with Megan Ferguson, the managing director.

Tony remembers something he was told when he was 13 years old that has stuck with him ever since: “Tell me, I forget; show me, I remember; involve me and I understand.” It’s what makes him want to get the kids deciding what they do with the profits from their tuck shop (they put them back into the club), help them foster good relationships with the police, and teach them the value of things in life.

They also get great feedback from parents, Tony said: “They can’t believe how the kids change, how confident they’ve got. And if there’s ever an issue, they come to us.”

A heat map shared on the club Instagram account (also run by the children) shows a drastic drop in anti-social behaviour in the vicinity of the club when its doors are open. Surrey Police could not provide more up to date information at the time of publication.

Kids would be down the ‘wrong path’ without the club. Megan is clear that were it not for the club many of the children would be going down the “wrong path”. The Tattenham and Preston neighbourhood, where the club is, ranks 7th in Surrey for overall deprivation, according to figures from the county council. Nearly 20 per cent of the children in the area are in absolute low income families, which compares to 8.8 per cent in the borough of Reigate and Banstead, and 7.7 per cent in Surrey as a whole.

Ellie Vesey-Thompson, Surrey’s deputy police and crime commissioner, said getting the kids in from eight years old is an important factor and praises both the impact on the children and the fact they are “diverted” away from getting drawn into crime and exploitation. But she’s clear that a similar set up wouldn’t work in all parts of Surrey in the same way, even if she did have the budget to do so. She said: “It’s not just about the building, it’s the environment they’re creating. If you put one of these all across Surrey, it wouldn’t have the same effect without having a Megan and a Tony in it.”

Megan not only knows all the kids’ names, having grown up in the area she also knows a lot of their parents too. With young children of her own, she fits the role around her family, and contrasts the difference between what they are running compared to the “dirty, grotty” youth clubs she went to as a youngster. She said her role is not the same as the kids’ teachers or parents, and is happy to remind them that if they don’t want to be there, they should leave. Saying it’s important to teach the kids how much things cost, from bouncy castles the club hires to trips out, she said they start to appreciate how expensive the real world is.

With kids coming from as far afield as Leatherhead, Guildford, Kingston and Croydon, Megan says the space is a “privilege” for the children, and that’s what makes them want to stay. She added: “Some of these kids don’t have a voice in their life, they don’t feel like it but we give it to them and we give them that power. All we can do is guide them along to making the right decisions.”

Surrey County Councillor Rebecca Paul highlighted the strong relationship between those running the club and the children there. She said: “This is just a club that the local community feel real ownership for and, as a result, the kids really want to be here. They want to participate.”