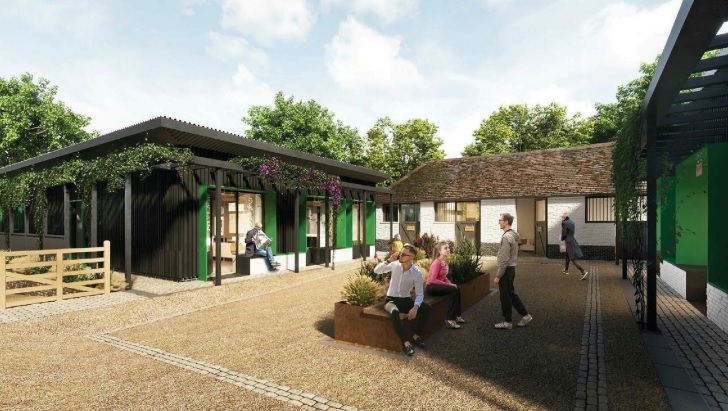 Epsom and Ewell Times has reported recently on planning dilemmas for our Borough. We are not alone in facing pressure on Green Belt land. 2 miles away from the edge of the Borough, Elmbridge Borough Council decided on a Green Belt development. Emily Coady-Stemp reports:

Studios for business start-ups and three new homes have been given the green light at the “gateway to Elmbridge” despite fears for the future of a golf club.

One councillor claimed others “aren’t concerned” about the borough’s local welfare or green belt as the application was approved.

The application, submitted by the family who have lived at The Waffrons, in Chessington South, for 30 years, will see the current stables on the land demolished.

Surbiton Golf Club objected to the plans due to fears that potential additional traffic to the site, which is accessed through the course, would affect play on its first, fifth and eighth holes.

Elmbridge Borough Council’s planning committee voted for the plans on Tuesday (September 6), having rejected a motion to refuse them that was put forward by Councillor Janet Turner (Hinchley Wood Residents’ Association, Hinchley Wood and Weston Green). She was talked into putting forward the motion to refuse the plans by Claygate Councillor Alex Coomes (Liberal Democrats) who said she should do it “for completeness and for democratic reasons”. Cllr Turner had previously said that listening to the debate she though there was “very little point” in her putting forward reasons for refusal for a vote. She added: “It’s fairly obvious to me that people aren’t concerned about our local welfare or our green belt, so that disturbs me quite a lot.”

Her reasons included it being inappropriate development in the green belt, as well as traffic concerns along the single track lane. Cllr Turner described the site as “very important” because it was the “gateway to Elmbridge from Greater London” and a corridor of green land from Claygate and Hinchley Wood to Long Ditton.

Officers at the meeting said the bar was very high for assessing “harm” in green belt land that was previously developed, as this had been. The three planned houses on the site would all be detached bungalows, with an applicant’s representative stating one of the homes was for the daughter of the family currently living there.

The 11 studios would be from 10 to 19 square metres each, with a communal area around a courtyard. The current use of the land for horses would stop, with commercial livery being replaced by it only being used for the private enjoyment of the new homes. BabyBarn, a shop for baby equipment currently on the site, would stay, with part of the stables being redeveloped for storage.

Keith Blake, chairman of Surbiton Golf Club, spoke at the meeting to object to the plans, which he called the “biggest threat to the future of the club and course”. The club, which has been in existence since 1895, has around 700 members and membership fees of £1,900. Mr Blake said the club did not object to some development of homes on the site, but saw the commercial element as “perhaps a step too far” and that traffic needed to be reduced or limited. He added: “Otherwise, I see the members walking and joining other clubs. “If we lose 20 per cent of our membership, the club will not be in existence for the community in the future.”

An officer’s report into the application said the plans were not “considered to adversely impact upon Surbiton Golf Club to warrant a refusal reason”. Conditions had been put on traffic entering the site both during the construction phases and once in use.

Many councillors were in favour of the small business units, saying they were in demand in Elmbridge and would be even more so when 60 offices in Weybridge were lost as part of a Regus site redevelopment.

Councillor Bruce McDonald (Liberal Democrat, Claygate) said he had “great sympathy” with the golf club and concerns around traffic on the road but like others saw no information to conclude there would be more traffic than currently on the site. He added: “I would have artisan studios everywhere, I think it’s what we need. I think it’d be great for Elmbridge.”

Councillor Rachael Lake (Conservative, Walton North) asked councillors to raise their hands if they had ever heard of a golf course going out of business or bankrupt, because she had not. She added: “I sympathise because it’s all perception. “It’s the fear of going to the dentist, when you get there, it’s nowhere near as bad as you think.”