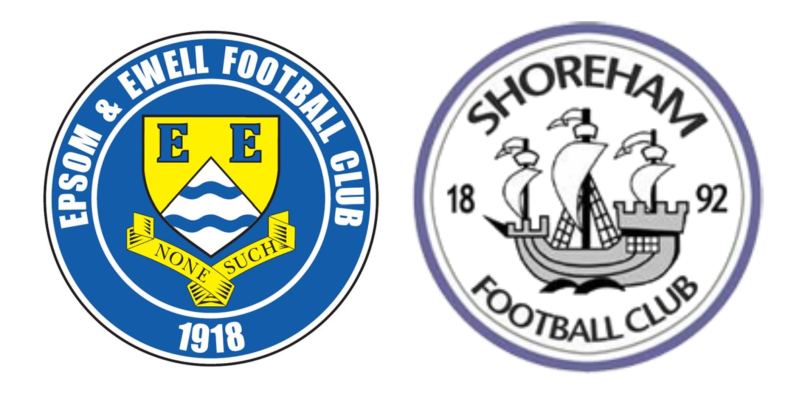 Two very late goals after 85 minutes of attritional combat ensured that the best two teams in the League couldn’t be separated on Saturday. However, as a spectacle, this match won’t live long in the memory, with exception of a deserved 98th minute equaliser from our boys, which may turn out to be an extremely important goal in the grand scheme of things.

Shoreham were the visitors to Fetcham Grove and although they kicked off in third place in the table, they represented the largest threat to our title hopes, sitting six points behind us but with two games and boasting an unbeaten record. They also held a 100% away record in the League.

We made just the one enforced change from our win at Wick as Nick Wilson had to sit this one out after accumulating five bookings; he was replaced in the starting eleven by Gavin Quintyne, and that gap on the bench was filled by Tre Trowers. We made a bright start and had a half chance in the first thirty seconds when Johnny “Sonic” Akoto got down the right wing, but his pull back was skied by Athan Smith-Joseph.

We had another opportunity after Smith-Joseph was fouled around 25 yards out and Ryan Smith’s set piece cleared the bar by around a foot, while in response Shoreham also had a couple of free kicks of their own, but without major threat. In reality this was to be a match with a number of half-chances, but very few really good ones.

There was no shortage of fight from both teams as the players knew that this was an extremely pivotal encounter. Neither team were getting very close to goal and we had another Smith free kick that just cleared the bar before Jaevon Dyer’s ball in from the right was just ahead of Jamie Byatt. Brad Peters headed a Smith corner goalwards, but the danger was cleared, while at the other end Akoto headed a Shoreham effort on target clear from the goal line. As the match meandered towards half time Dyer tried his luck from twenty-five yards and Lewis Sheppherd in the Shoreham goal just about kept the ball out, while at the other end a misdirected header from Zach Powell was met by a wayward shot from the visitors from just outside the box.

The second half continued in a similar vein but with arguably even less chances. The game was a little niggly at times and the play was often stopped. We did have a very good chance in the 48th minute after Josh Owen won the ball and found Byatt who sent a great pass over to Smith-Joseph, who then cut back in, beat his man and saw his shot beaten away by Sheppherd, with the loose ball being fired at goal from Byatt but blocked by a defender.

Kane Charles had to punch away an Alex Fairs free kick from wide out and Harry Heath and Danny Jones picked up yellow cards for cynical fouls as the game degenerated. Charles then required treatment after appearing to get another knock that looked like it was also fairly deliberate before Quintyne picked up a yellow of his own and the game looked to be heading towards an uninspiring goalless draw. Until the 88th minute that is, when a visiting player got beyond Akoto who chased him but then brought him down needlessly for a penalty. Jones stepped up for the penalty, but Charles produced a good save, only for Marcus Richmond to nip in and fire the loose ball into the net from close range before our defenders could clear the danger.

This wasn’t in the script! With just two minutes of normal time remaining we were in danger of losing our second home match in a row, but responded well. and got the ball forward a bit more frequently as time began to run out. As Shoreham players suddenly started to require treatment for injuries we tried to push them back. However, a Dyer free kick that went over the bar was all we could show for it as the clock ticked deep into injury time. Fortunately redemption was coming and it arrived in the 98th minute, Owen chased a ball into the far corner, retrieving it before delivering a great cross with his left foot. The ball was flicked on by one of our substitutes Ben Bauchop and was met at the far post by the outstretched leg of Smith-Joseph who found the net from about five yards out to secure the equaliser.

The match finally concluded after almost nine minutes of injury time and with the Shoreham bench saying that “this wasn’t the World Cup” but looking back, there was quite a bit of injury time required in this half. Smith had required treatment before limping off, while injuries to Charles, Dyer and Smith-Joseph also took a while out of the forty-five, so maybe the extra time was justified in this case, although it did seem a tad generous.

Was it a fair result though? Absolutely! To lose this match would have been extremely harsh on our boys who were at least as good as our opponents. However, it must be said that we were not great and have played far better this season. Of course, the importance of the occasion almost ensured that this would be a tight encounter with neither team wanting to give anything away. It was just a shame that the match wasn’t very well advertised by the club who seem to think that one tweet, repeated a few times in the week is sufficient. It clearly isn’t, as an attendance of 94 counted by two different sources (inclusive of a few from Shoreham) testifies, although the club advertised it as 107. Maybe they were all inside the club house watching the World Cup instead!

This contest marked the halfway point of our League season and we have now completed both of our matches against Shoreham, failing to win either. However, we have a better looking run in and have nine of our remaining sixteen matches at home. Under the circumstances, I believe this point was better for us than for Shoreham, but only time will tell if that is the case. One thing is for certain in my opinion, which is that these are the best two clubs in the division and the title will go to one of them. However, it wouldn’t surprise me if this battle goes all the way to the final day and this late equaliser from an otherwise forgettable match, may prove to be one of the most important we will score all season.