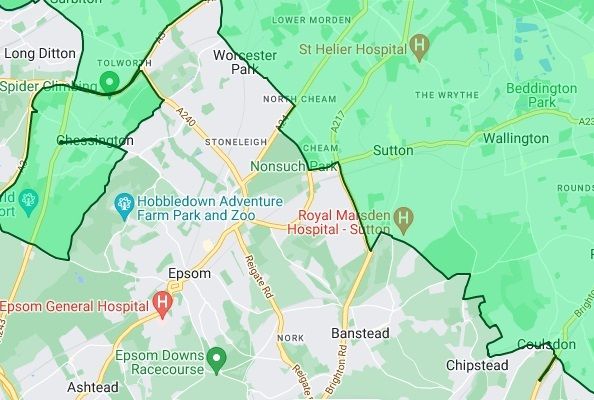 By Emily Coady Stemp Local Democracy Reporter: London’s proposed Ultra Low Emission Zone (ULEZ) expansion would mean drivers trying to get to some popular landmarks in the capital’s border with Surrey would be liable for the £12.50 daily charge.

Transport for London’s (TfL) consultation on the extension of the area covered by the the ULEZ ended last month, and many Surrey councils have submitted their responses to the plans with hefty opposition.

The zone, which sees drivers of any vehicle not complying with minimum nitrogen dioxide emissions standards charged £12.50 per day to drive inside the area it covers, could be extended from August next year.

Elmbridge Borough Council called on TfL to delay the expansion to allow more analysis, while Tandridge District Council has asked that any scrappage scheme introduced for Londoners also be offered to Surrey residents.

The aim of the zone is to reduce nitrogen dioxide by around 30 per cent across London, and it currently covers all areas within the North and South Circular Roads.

The border shift would cover all London boroughs, adjacent to large parts of Surrey, and could impact on some family days out for drivers of certain cars.

For example, drivers of cars which don’t meet the emissions standards, and who drive over Hampton Court Bridge to Bushy Park will be eligible to pay the fee.

TfL’s website says any money received from the ULEZ will be reinvested into transport such as cycleways, buses and the tube, and go towards improving London’s air quality.

The planned extended zone would also go down the A243 as far as the junction with Fairoak Lane and Rushett Lane, meaning Chessington World of Adventures would be included as well.

Hospital appointments could also see drivers charged, with St Helier and Royal Marsden hospitals both falling within the planned zone.

In Epsom and Ewell, eight out of the 13 wards in the borough will border the ULEZ and be directly affected by it.

A meeting of the borough council on July 28 agreed to respond to TfL asking for a longer consultation period, an extension of the scrappage scheme, and exempt routes allowing access to essential places and roads such as the A3, M25, A240 and the existing St Helier hospital in Sutton.

Councillor John Beckett, chair of environment and safe communities  committee, said: “We support the move to reduce high levels of air pollution, which the ULEZ scheme aims to achieve.

“However, owing to the acute economic pressure households and business are facing at this time, the scheme needs to consider the economic, social and mental health needs of all communities affected by this scheme, not just London boroughs.”

More on Epsom and Ewell and Surrey and ULEZ

Driving to Sutton or Kingston in an old car could cost you £12.50 next year!