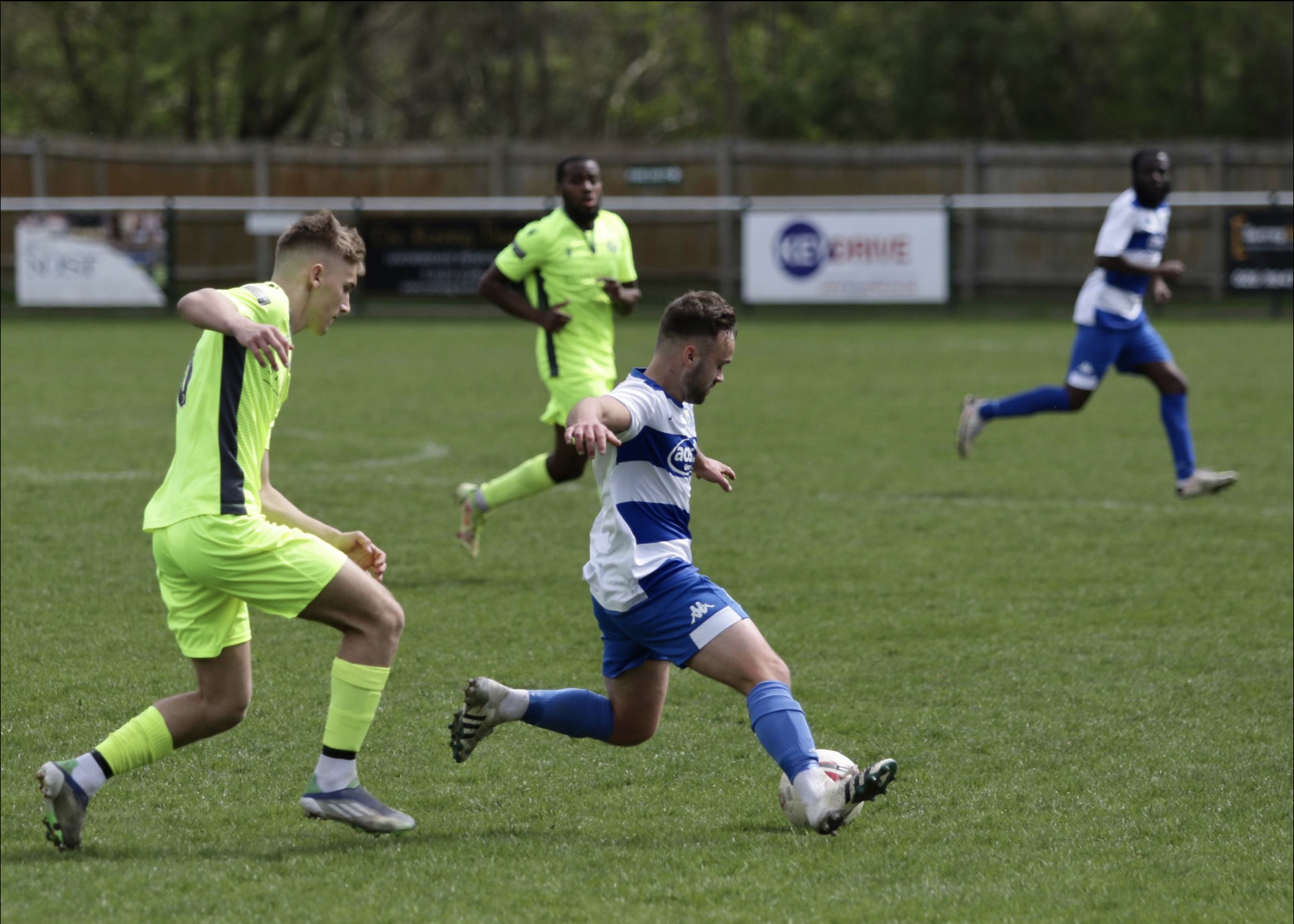 With our aspirations of the title mathematically disappearing on Saturday, our hopes of a home playoff match took a massive knock with a 2-1 home defeat against Dorking Wanderers Reserves who became the second club to record a “double” over us in the process. Results elsewhere meant that we dropped back below our opponents, but more significantly in terms of playoffs we also slipped behind Seaford Town and even a win at Mile Oak on Saturday will not guarantee us a home match in the post-season lottery, with a trip to Seaford now looking the most likely outcome.

Worse still, this great club I have supported loyally for forty years and which used to be such an inclusive and friendly, family community outfit, but nowadays only pays lip service to those attributes, showed a complete and utter lack of class in refusing to hold a minute’s silence for former Scottish Amateur International player Gerry O’Rourke, who made 43 appearances for us in 1976/77, scoring twelve goals, and had passed away eight days previously. No reason was provided for the refusal and in my time here nobody has ever knowingly been denied a minute’s silence, be it player, official or long-term supporter.

Following our win at Arundel on Saturday both Tommy Smith and Athan Smith-Joseph were unable to go in this match and this was unfortunate as I’m certain that both would have made a difference in this encounter. The visitors opened up by putting a decent chance wide in the opening minutes while Mike Hill struck at goal from distance but without troubling Barnett in the visitor’s goal. Then we had the further misfortune as Manager Jamie Byatt limped off, clearly frustrated and annoyed in the 20th minute.

We had shaded possession to this point, but without providing much of a real threat. Ricardo Fernandes did well on the right-wing to deliver a ball across goal but there was no one there except for Hill at the back post, and his delivery back in was then miscued by Fernandes as he tried a spectacular volley.

We went behind in the 34th minute when George Membrillera received the ball about ten yards out and turned his defender far too easily, rolling the ball back across Sheikh Ceesay for the opening goal. Things became worse when Nabeel Ghannam struck at goal from at least twenty yards out just before half time and the ball sailed over Ceesay’s head and into the net for a second goal, although our keeper redeemed himself with a good save from Conan Torpey who had broken through on goal moments later. Unfortunately, almost the final act of the first half was the departure of Hill into the dressing room as he was struggling with his breathing after putting in two tremendous shifts for us in the last week. His reappearance for the playoff matches will be absolutely crucial to our hopes.

With no Byatt and no Hill, it was always going to be an uphill shift for our boys in the second half, but they made a decent fist of it. Daryl Spiers came on for his debut after joining from Horley Town in relief of Tre Towers and we nearly pulled one back through another sub, Tyreke Leslie after a corner reached him at the far post, but his shot was blocked by Barnett’s legs. Minutes later Luke Miller struck at goal, only for the ball to strike Kofi Quartey and deflect just wide of the post. It could have gone anywhere!

Josh Uzun was next to the show, and he reached a ball ahead of Barnett, but the keeper stood his ground and he had to pass back out and the danger was cleared. The visitors were being pushed further back though, with Quartey causing his defender a lot of problems and Miller attacking from the left and in the 66th minute, his run was ended abruptly by a defender in the penalty area. However, Uzun’s spot-kick was a really poor one by his standards, straight at the keeper and without any real power and Barnett was actually down to save before the ball got there. This was probably why he was unable to hold on to it, but we were unable to get the loose ball in and the danger was cleared again.

Next to try was Fernandes after Quartey was brought down, but his free-kick from twenty yards just dipped over the bar, clipping the netting on its way down. Then Miller struck at goal, but it was just going wide before Leslie got ahead to the ball, but couldn’t get it on target despite being only a few yards out.

The visitors were picking up yellow cards on a regular basis, three of them for delaying restarts, or in Nathan Hawkins’ case, simply throwing the ball away over the fence! We were piling on the pressure and Spiers sent a header wide from a deep Louis Chin free-kick before Spiers found Quartey in a good position, only for our man to lob the ball well over the bar.

We finally opened our account in the 89th minute when a deep Spiers ball in was flicked on to Quartey at the far post and his volley sent the ball back across goal and in off the far post. There was still time to save a point, but when the ball fell to Leslie at the far post with the keeper committed, he missed the target from close range! We kept pushing and Miller sent another dangerous ball in left-footed, only for Quartey to miss the ball which was then cleared.

By the end of a frustrating ninety minutes, it is fair to say that we definitely deserved something from this match, but when you look at the league table, you will see that a point makes no real difference to our situation. We needed all three and we failed to get them and will now almost certainly have to travel larger distances if we are to gain promotion now. It isn’t beyond us, assuming we can get some of our injured players back and the good news for us is that we don’t have to meet our local Dorking rivals again this season. It was about the only bit of good news though.