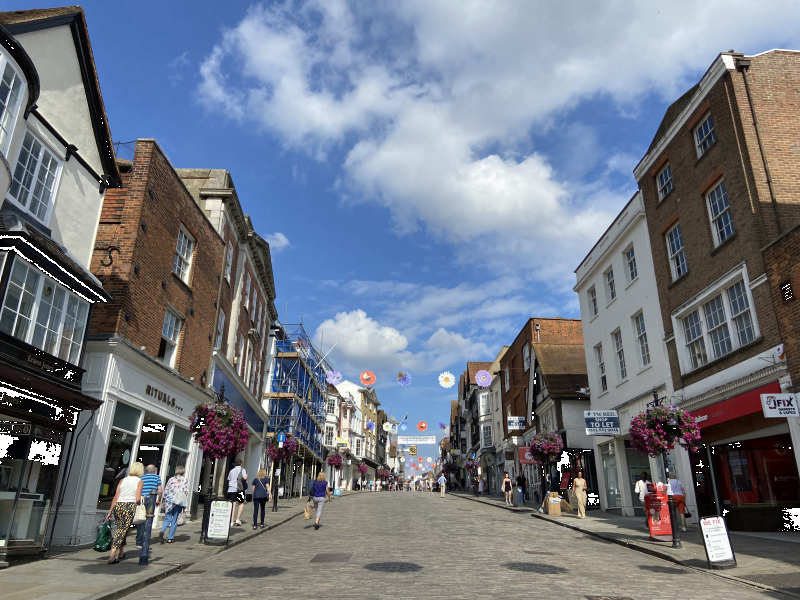 Guildford town centre is going through some huge changes, with developments taking place on the sites of some former big names and plans to open up the riverside. The LDRS* has broken down the areas which will see new homes built, and how the town centre will be changing over the coming years.

Guildford’s town centre masterplan sets out the future vision for the town, including developing the town’s underused sites around North Street and hundreds of new homes. New homes in the town have been put forward as the more sustainable option, with shops, facilities and public transport all within walking distance and a need in the area for lower-priced homes. But the amount of affordable housing has been an issue on some developments, with developers citing rising construction costs and lengthy planning processes meaning schemes are no longer able to offer high numbers of affordable homes, if any.

We round up some of the biggest developments below and how they will change the face of Surrey’s county town.

Debenhams
A planning application for nearly 200 homes on the former Debenhams site was narrowly approved by councillors on November 22. The development will see the old store knocked down and two new buildings replacing it alongside shops, a riverside walkway and possibly a boutique cinema. Councillors approved the controversial plans by six votes to five, debating the limited amount of affordable housing and the flood risk, with the Environment agency ultimately satisfied with measures put in place to reduce the risk of flooding. This site will be a key part of the town centre redevelopment and opening up the riverside for the public.

Train station
In February 2018, planning permission was granted on appeal for developer Solum’s £150million regeneration of the land around Guildford Station. The borough council had refused the application because of concerns about the development’s impact on the Grade II* listed St Nicolas Church, among other things. The Station Quarter when complete will include a new station building, more than 400 homes, as well as shops and office space. The developer’s website highlights £25million of station improvements including a multi-storey car park and new plaza with shops and cafes.

Old Orleans restaurant
The former restaurant next door to the Odeon cinema is currently empty and the council, as the owner of the site, has no current plans to lease it out. Councillor Tim Anderson (Residents for Guildford and Villages, Clandon and Horsley), the authority’s lead councillor for assets and property, said it would not be cost-effective to lease it in the short-term while there were plans to develop the building. He added: “The full plan for the Bedford Wharf area, including this site, forms part of the emerging town centre masterplan, Shaping Guildford’s Future. Proposals are that the land will support a wide mix of uses. It will support the town centre with new homes, jobs, community and service spaces.”

North Street
The area around North Street has been called the “poor relation” to the town’s picturesque high street – just don’t call them cobbles. The redevelopment of land around the bus station, including the refurbishment of the bus station itself, could bring nearly 500 new homes and part-pedestrianise North Street. Plans originally put forward in December 2020 included 700 homes, this has steadily been reduced after public consultations, as has the height of the buildings in the scheme. The tallest building has been reduced from 14 to 13 storeys and the second tallest from 10 to nine storeys. A video on the developer’s website shows public squares, restaurants, and new shops and cafes as part of the plans, which should be considered by the council’s planning committee in January 2023.

Wisley airfield
While it’s not within Guildford town centre, the proposed new town which may be built on the former Wisley Airfield could still have an impact. Campaigners have raised concerns about how local village roads will cope with traffic from the residents of the proposed 1,700 homes. The new town would be around a 20 minute drive down the A3 from Guildford, and a similar distance from Woking. The site is also just over a mile from the A3’s junction 10 with the M25, where junction upgrade works have started.

It may be just another reason to look again at Guildford MP Angela Richardson’s calls for the A3 to tunnel under Guildford to help with traffic and pollution, as she called for in Parliament in December.

An outline application for the plans will come to the council’s planning committee in 2023.

Tunnel vision for Surrey’s A3?

Housing plan flying in the face of opposition